As anyone who reads this blog knows, my main goal for this season was dismissed before the season even really got started. My focus was based around trying to become one of the top singlespeed riders in the NUE series, which then changed to aiming for top tens in the Men's Open division of the NUE. Prior to the first NUE of the season, I knew that racing the singlespeed this year was out of the question. After the first NUE race of the season, I pretty much knew that competing in the NUE series or any races containing singletrack was out of the question. I worked through a lot in the off season, made gains in my fitness and needed to find something that would make it all seem worthwhile.

Thanks to Cam Fraser of Blue Mountain Revival Productions, Eric and Erinna Wever of Pisgah Productions, and Andrew Stackhouse of Pirate Race Productions I was able to channel my focus into a series of gravel races called the Blue Ridge Monster Cross Series. These three race promoters put their heads, events, as well as a large wad of prize money together and the result was a series that is sure to attract a cult following in the upcoming years.

The Blue Ridge Monster Cross Series consisted of four ultracross races based out of different venues in Western North Carolina. To be eligible for the series, a racer had to start all four races in which their top three results would be added up. The lowest point total would determine the series winner.

Wilson's Revenge was the fourth and final race in the series. Going into the race down two points from Devin Clancy, I knew that a win was the only chance I had to overtake the top spot in the series. Being that Devin is "very good at bikes" I also knew that he would have to have an off day for me to gain two spots on him. On our drive out to the venue, the Brown Mountain Beach Resort, I told Vanessa that I had a feeling that tomorrow was going to be my day. I don't know why I felt like things were going to go my way, but I just had a good feeling. 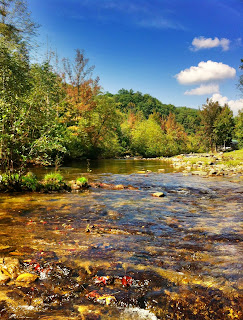 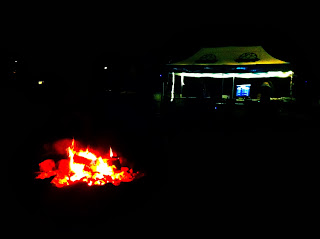 The race started with a long flat dirt road section. As we were rolling along at a casual group ride pace, Brian Rogers jumped off the front to get everyones blood flowing. We were still bunched up in a large group when I noticed Devin rubbing his right hamstring. Not sure of what was going on, I took the opportunity to spike our pace a couple of times. If he were having issues with his leg, this tactic may or may not have some sort of affect later in the race. All doubts of Devin's condition were erased from my mind as he bolted on the first major climb of the day. I gave chase and within minutes it was just the two of us. It didn't take long for him to dance away making it look easy in the process. There was nothing I could do, as he climbed out of sight. 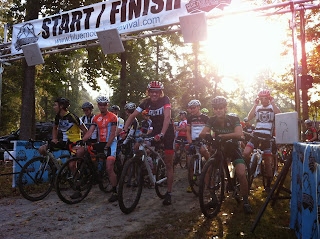 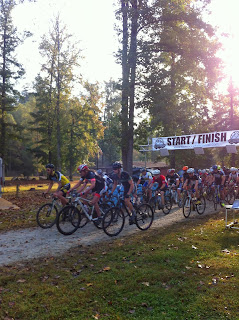 I crested the top of the climb solo with Devin out of sight and no sign of anyone behind me. Thoughts were spinning in my head and after just getting schooled in climbing 101, I knew the only chance I had at catching Devin was to wait for help. I slowed up until I was caught by Garth and Andy Applegate. While explaining my plan to Garth, he stated that it was pointless to try to work together as the course would not allow it... not what I wanted to hear.

Garth and I were pushing hard when we encountered a section described as a "hike-a-bike". Knowing that our selection of bike should have the advantage on this section over Devin's CX bike, we continued with our aggressive pace. While picking our way through the rocky rutted out climb I caught a glimpse of white up ahead. It was Devin and he seemed to be having difficulty with something. As I approached and asked if everything was alright, he mentioned something about breaking a spoke. Part of me wanted to stop, help him out and continue on together, but I knew that in this particular situation I needed to use his misfortune to my advantage. I bolted with Garth in tow and Devin not far behind.

Using a singlespeed technique of spinning and tucking I was able to gain speed on the downhills fast. It wasn't long until Devin had dropped back and it was just Garth and I once again. Knowing that Devin will never give up, we rode hard. Knowing that Devin had some sort of mechanical, it was important to push the pace thus causing Devin to ride his equipment hard. Garth and I were feeding off of each other to see how much faster we could go. At times it seemed like we were teammates and other times it seemed like a duel. It was apparent that we both wanted the overall win and it was on.

Around the 30 mile mark I heard the dreaded "fuck, I have a flat" come out of Garth's mouth. After asking if he had a tube and air, I went darting off down the doubletrack solo. I couldn't believe what had happened on the course so far and once again I had the feeling that it was my day. I quickly cleared the thought from my head and focused on riding smooth, picking fast lines and protecting my thin tires. At this point there was about an hour left in the race. I knew that anything could happen at any time and there was plenty of time to be chased down by Garth, Devin or how about the always fast when he doesn't have multiple mechanicals, Brian Rogers.

Finding it more difficult to keep up the frantic pace solo, I found myself taking lots of looks over my shoulder. It was with three miles to go that I saw the yellow jersey of Brian. I had just made a 180 degree turn from gravel to pavement into a steep hill. Brian was a couple hundred yards back and was charging hard. Figuring the route would finish up with this pavement stretch and with Brian on a CX bike, I almost conceded. Thinking about what Devin taught me earlier in the day during climbing 101, I stood on the pedals and gave it everything I had. Upon cresting the hill, the pavement took a turn down. Shit!! This is not going to end well for me. Spin, tuck, spin, tuck. As I entered the venue, I looked behind me, Brian was nowhere to be seen. I looked in front of me, again no Brian. I had taken the overall win and Brian was taking the second spot. Two points and the series win!

Standing around the finish line watching rider after rider come in, bits and pieces were being put together as an incredible story of determination was unfolding. Devin had broken a spoke when Garth and I came upon him. His wheel was so out of true that he had to unhook his rear brake in order for it to spin and when it did, it rubbed his frame with each revolution. He worked his way back into second passing Garth on the side of the trail. Knowing that I was just ahead, he gave chase with only his front brake on gravel  descents where speeds of 40+ were obtainable. Chasing hard, he had a high speed wreck ripping off his rear derailleur along with plenty of skin. Bloodied up and broken, he rigged his bike up singlespeed and continued to crush it till the end.

I hate winning a race and especially a series due to someone else's misfortune. Devin was clearly the better athlete this season. He trashed his bike and body trying to claim something that was rightfully his. He had no excuses, negative comments or self pity after the race. All he had to say was "I only know how to go all out" and "that's racing". 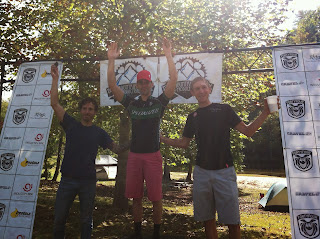 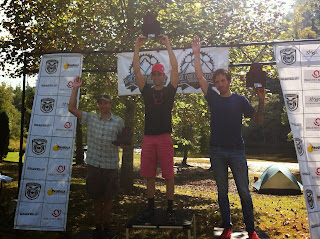 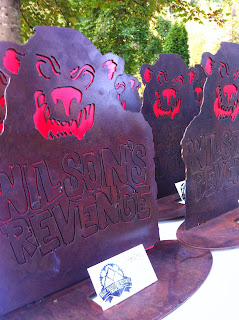 As we hear time and time again, "things happen for a reason". If I hadn't had the back injury creep up on me, more than likely I would not have raced the Blue Ridge Monster Cross Series. All of the changes I made in order to deal with my circumstance was welcome. Gears, full suspension, now a CX bike... who would have thought. Thanks to the series, I met some outstanding people who are not only competitors but friends. 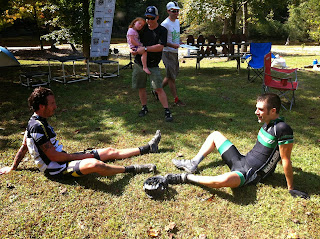 Thank you Cam, Eric, Erinna, and Andrew for putting in the time and effort that it takes to organize and promote these events. Each of you have your own style which is appreciated and each of you do an impeccable job. These races not only gives us racers a chance to push our minds and bodies to their limits but it gives us the opportunity to meet increadible people who unknowingly inspire those around them. 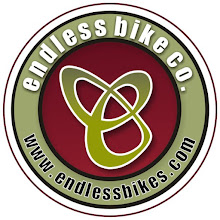 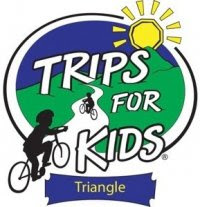